I'm not a fan of raising high expectations and I'm also afraid the title here did just exactly that, so to compensate let me warn you that this article does not describe a home where we have assigned a Product Owner who defines what to do and in which order. We don't have a ScrumMaster who relentlessly removes impediments such that the entire family can get things done at warp speed. There are no Story Points and no burn down charts (yet). It's not a story about this super family that has found the ultimate key to happiness.

That said, we do experience an improved family life – especially during the otherwise stressful morning and evening routines with the kids.

Routines is what this posting is about. In a separate article I will write about the other non-routine tasks and how we deal with them in our family.

What worked for us doesn't necessarily work in your family and what didn't work for us might be just the right thing for you. I will describe our path, the experiments we ran and what we have learned to hopefully create inspiration and maybe even set you of onto such a journey yourself. The goal is to create just one slightly more happy family.

My family consists of my 8 year old twins Sofia and Victor, my wife Linda and obviously myself. We live in Switzerland where both my wife and I work mostly in IT – I as an executive agile trainer and coach, my wife mostly as data analyst and programmer, often introducing agile concepts and practices to the teams she is working with. 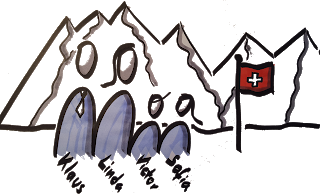 Some three years ago, when the kids started the mandatory part of their formal education, our mornings and evenings became more stressful. We had to watch over the kids constantly to remind them what needed to be done and in which order – brushing the teeth, going to the toilet, putting on the pajamas, etc. Apart from this being a tedious job, raising our voices was an integral part and it made us unhappy many mornings and nights.

The reason for the above is, I guess, a combination of the strict deadlines we were working towards every day (school start in the morning and bed time in the evening – admittedly the latter is self-inflicted, but still) and our developed reflex to apply pressure, when we feel the kids were falling behind schedule. Nonviolent communication might also have helped us but that wasn't part of our repertoire back then and is a completely different topic.

My daughter working the very first version of our task board

This very simple version consisted of a "ToDo" and a "Done" column for each kid and stickies with their tasks. Because our kids couldn't read yet (they had just turned 5 years old) we made drawings. It would be things like "Brush you teeth", "Get dressed", "Brush you hair" (only for my daughter), "Go to the toilet", and "Pack your school bag".

Post-Its is all you need! Because they don't stick well to our walls, I am also using a big piece of flip chart paper here.

Next step was adding an evening board. Some stickies would be the same (don't re-use them, draw new ones), some would be different. Here you see "Brush you teeth" (again), "Put out your clothes for the next day" (as a side note I can highly recommend parents to get the kids to do as much as possible the evening before – that certainly makes the mornings easier), and "Clean up your mess downstairs" (the kids sleep upstairs, downstairs is the living room in our house).

Soon enough the kids started to make their own tasks ...

... to remind themselves they had to do things like consider packing for sports the next day, put on some special tooth gel prescribed by the dentist, do their homework, and drink water (because once in bed I wouldn't let them get out again).

Can you guess what the picture in the upper right corner means? No you can't! Does it matter? No it doesn't! It's like User Stories – they only need to remind you of the requirement and the conversation you have had around it. Had you drawn this picture yourself you would know exactly what it means (it is "doing push ups" btw.) 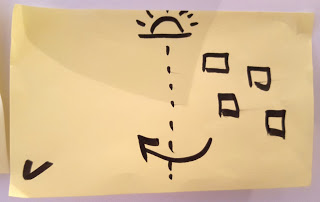 Some time ago my son discovered that some tasks depend on each other. The dentist has told them they shouldn't be drinking water after they had brushed their teeth (we never learned that in school!?), so we had a chat about what that means for their tasks and that the one about drinking water should always come before the one for brushing teeth.

We have also talked about priorities – say you run late one morning because you slept in, which tasks would you want to do with a high and which with a maybe lower priority to the point where you will skip them completely if the alternative would be to miss start of school.

The most recent addition to our routine are the dailies. Every morning we (well, at least one adult and the kids) are gathering to quickly go through what is on the agenda that day.

Experiments that didn't work (at the time) 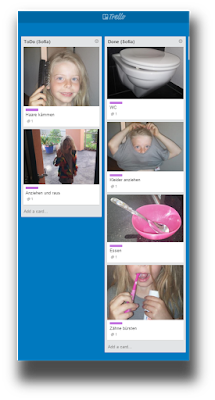 Because stickies don’t stick forever, because resetting the board is a wasteful job (doesn't provide any real value and should be automated), but not the least because I have a background in IT (nerd!), I obviously tried to make the whole process digital and experimented with different tools. I liked Corkulous on the iPad, Trello looked even more promising. It allowed for quick board resets (not fully automatic yet) and using photos (quicker than drawing tasks). However, the whole experience didn't do the trick for us. Maybe because there only was one tablet for both of the kids, maybe because moving tasks digitally is not as motivating as moving physical stickies, maybe it was just too little “in your face” – I am not sure exactly what the reason was, but we went back to paper after a short while.

I am tempted to give the electronic tool another try some time in the not so distant future – possibly as soon as we have decently sized and reasonably priced flat panel touch screens that can be attached to a wall to resemble a physical task board much better than what is possible today.

In an attempt to simplify the process, we tried to have all stickies for both the morning and evening routine on one board. That didn’t work at all. Especially in the mornings the kids lost track of how far they had gotten. Not being able to move all stickies over to “Done” before leaving out the door was not particularly motivating for them. We soon went back to having a morning and evening board.

Even though the kids have an overview of what yet needs to be done before the morning (and evening) routine is complete, they often ran late.

I assumed it was because they couldn’t read the clock yet and set up the tablet with a countdown timer showing how much time was left till they had to get out the door exactly. Not a particularly successful experiment either.

I think the real reason is that they not yet have a good sense for time and whether they are running late or not. This is still a source for parental stress in our little home. A much better solution seems to be this colorized clock my wife constructed. The kids understand that yellow means “go, go, go!” (we still have to remind them far more often than we like, how little time there is left).

We experimented with a reward for achieving a short term goal a certain amount of times. This quickly lead to pure focus on the reward. The actual goal of being in bed on time somehow got out of sight completely. There were tears when the reward moved further away again (late in bed). It just didn’t feel right and thus the experiment was stopped after one completion.

Later we introduced something similar with being out the door on time. Immediately my son asked me “What is the reward?” to which I replied “Nothing”. He looked a bit disappointed, but accepted it without further discussion. Their motivation for being out the door hasn’t suffered because of the lack of a reward – in contrary, they seem to be more focused.

The introduction of our task boards hasn’t completely changed our lives, but it has made good days really cool (sometimes we don’t need to do anything – the kids just take care of every task themselves) and the bad days rarer.

Moving stickies, visualizing through means like the colorized clock and having team goals (without rewards) is motivating for the kids, gives them a sense of progress, and helps them focus.

As a hint to parents considering trying this themselves, remember to be consequent – make rules, agree on them with the kids and follow them. Change them if necessary, but don’t break them!

Experimenting is important. Whatever you do, I can only recommend to treat it as an experiment initially. Once you see it has a positive effect, you can make it a more permanent solution.

So, is the title “Agile @ Home” misleading? Possibly. Agility is about reacting to unforeseen change. Routine is kind of the opposite. Still, we are using elements from Scrum and Kanban and had I not known about them, we might still have more bad than good mornings and evenings. Basically I don’t care what we call it. What I do care about is the goal which was to have a slightly happier family.

The next blog post which will be about a product backlog, weekly sprints with a sprint backlog and family meetings, a family board, policies and more. It probably deserves much more the title of “Agile @ Home”.

For tools I can recommend